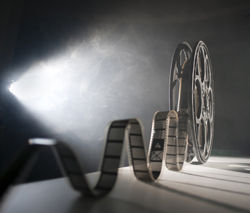 Sampling frequency in audio recording can perhaps best be described by first taking a look at your favorite Hollywood movie. Even though life happens continuously, movies show us fast chains of still images that our brains interpret as continuous movement. Usually the rate is around 24 frames per second. Sound is also continuous, but it takes a lot more than 24 “frames” of sound per second to sound decent. Although a film camera is taking pictures of people and real objects, audio equipment is taking “pictures” of sound waves. These pictures are called samples, and the most common rate is 44,100 sound samples per second, or 44.1 kHz.

You might remember from a boring day in physics class that different speeds of sound waves produce different pitches. When taking samples of these sounds, the sampling frequency must be fast enough to not miss any of these exceptionally fast waves. Some really smart people in the 1920s and 1930s figured out what “fast enough” is when it comes to recording. It's something known as the sampling theorem. To put it simply, your sampling frequency needs to be twice as fast as any of the sound you are recording in order to have all of the necessary samples to sound continuous when it's played back. Knowing that the high end of human hearing stops at around 20 kHz, and that a little wiggle room is nice to have, we know why 44.1 kHz is used for most playback applications.

Of course there are more sampling frequencies than just 44.1 kHz. Despite what the sampling theorem suggests, some people claim to be able to hear an improvement in recordings with sampling frequencies much higher than 44.1 kHz. 48 kHz is popular in more video-related applications, and 88.2 and 96 kHz are both popular since they are double the frequency of what the end product will be, making the conversion down to 44.1 or 48 kHz easy for the computer. All of this is about as clear as mud. Is it worth it to record at a higher sampling frequency? That's an ongoing debate, with some very passionate arguments on either side.

What it all comes down to is storage space. Storing 96,000 24-bit (see our post on 16-bit audio recording for more info on bit depth) samples per second of audio is going to take up a fair amount of space. If you do a lot of recording at home, or if you're like Jimi Hendrix (or me) and love multi-track recording, you might end up running out of storage space faster than you anticipated. Big record companies might not bat an eyelash at using almost a gigabyte of storage for a multi-track song, but that sure seems wasteful to me.

The Real World - Can You Or Can't You...Really?

If you want to hear the differences for yourself, record a short dialog twice: once at 44.1 kHz and once at 96 kHz. Have a friend or family member rename the two files so that only they know which is which. Listen to each of them and try your best to figure it out by how each one sounds. If you can't tell a difference (“the dog barked in the 44.1 kHz recording” doesn't count!), then your listeners probably won't be able to either.

One parting note: be careful not to confuse sampling frequency with bit depth when moving through the digital audio universe. It is a pretty common thing.