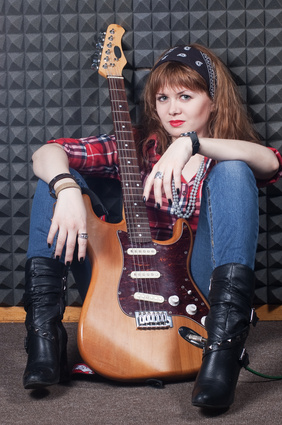 I read an article this morning that was actually about 6 mistakes people make when recording electric guitar. But I found myself mentally defending several of these "mistakes," remembering or imagining situations where it would be just fine to record electric guitar that way. As usual in the audio recording world, the real answer is it depends.

In Bjorgvin's article, he lists 6 things he recommends people try to avoid. One of them is is recording through a DI (direct inject) box using an amp simulator. Hey, that's my primary method of recording electric guitar. But for me it works. I'm not in a rock band and my albums don't usually have electric guitar on them. I use it to record demos and covers and other cool things (like my recording of "That Thing You Do!" from the movie of the same name - which you can see in this post) mostly to teach folks how to do audio recording. I understand what Bjorgvin is saying though. Recording through an amplifier and recording with a mic (or multiple mics) is the traditional way to do it. And if I were in a band and wanted to record the songs I'd been playing live, I'd want to record it just like I played it live - with the same amp on the same settings, etc. So the answer is - it depends.

Another thing on the list is to avoid compressing too much on the way in. Well, I would say that doing anything too much while recording would be properly called a mistake. But sometimes extreme compression is the sound the guitarist is going for. Sure, less compression allows a sound to breathe more. But breathing is not always the desired sound. Tom Scholz, of the group Boston is famous for his extremely compressed electric guitar sound. Again - it depends on the situation.