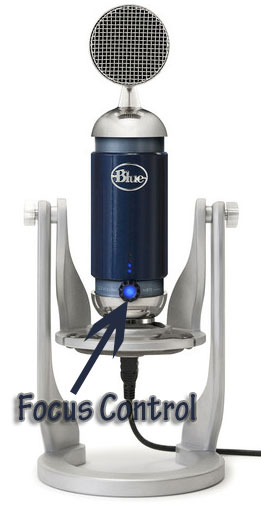 Anyway, both models of the Blue Spark mic come with something called "Focus Control," which is a button that creates two different types of sound, depending on whether it is activated (pushed in) or not.

Now at first blush, this sounded to me like a simple pad switch, which is common on a lot of different condenser mics. All a pad switch does is reduce (attenuate) audio below a target frequency.

Blue describes Focus control when in the "off" position (button sticking out) as providing an "enhanced low end." They say you can get the "big radio voice" in this mode, so voice-over folks pay heed. Then when you decide you want  a "more present" sound, you push the Focus Control Button in. This provides "greater clarity and detail."

However, Blue says this is different from standard attenuator "pad" switches because it doesn't treat the mic's signal output, but instead changes the input driver, essentially creating an entirely different microphone in a way. When an attenuator is applied to the output signal, as in the case of those pad switches, the quality of the signal can be degraded based on the quality of the mechanism on the mic. But by changing the input driver by "altering the voltage loading of the capsule," you get a change in the behavior of the capsule that is more nuanced.

I very much wish I had one of these mics here (hey, I can't buy every mic out there - sadly) [update Sep 2016 - I DID manage to get my hands on one for review. And the result is here: My Review Of The Blue Spark Digital USB And iOS Microphone. You can listen to several audio tests, including the focus control, to hear what that does.

0 comments on “Focus Control On The Blue Spark Microphones”