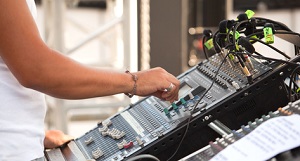 I wrote about this topic once before in the post - Using Auxiliary Sends For Effects In Pro Tools. That article references a video from Wink Sound showing you how to use auxiliary sends in Pro Tools to process effects on a bass guitar track - as opposed to simply adding (instantiating is the word usually used here, meaning creating an "instance" of an effect) each effect directly onto the bass track.

Well, I wanted to add some things to what I said in that article. First, I stated that the main reason for using an auxiliary send was to save processing power on your computer. Though this is still a major benefit if you have multiple tracks all dipping their buckets (my metaphor) into the same effects (say, reverb) trough (a metaphor for the auxiliary track with the effect on it). However, that is not the only benefit of using an auxiliary send/track for processing some effects.

As shown in the example in the video, the main benefit is the extra control you have by processing the effect independently of the dry (meaning with no effects) audio from the bass track. In the video, Mike creates a new track - the auxiliary track - and puts a chorus effect on it. Then he uses something called a "send," on the bass track, which basically just taps/siphons/splits off  the audio signal so you can send it somewhere else, while the main bass audio continues to the master output as normal. The "send" is routed to the auxiliary track to be treated by the chorus effect.

So far, there isn't much of an advantage to doing this as opposed to just sticking (instantiating) the chorus effect on the bass track, other than from an organization standpoint where you have both a dry and a wet signal to work with. But then Mike talks about adding an EQ to the aux track (which already has a chorus effect on it) in order to filter the chorus so that the chorus only happens in a certain frequency range. You wouldn't be able to do that if you just slapped both the EQ and the chorus effects onto the bass track.

So to sum up ((ha! a little send/bus/aux pun for you:)), using a "send" from an audio track to process effects has multiple advantages. It allows you to create a common effect track that you can send multiple tracks in order to share the same effect (BTW, you use a "bus," as explained in the video, to accept multiple  track sends for summing. Tracks, like an auxiliary track, cannot usually accept inputs from more than one source. So you set that single source as the bus). And it also allows you the flexibility to process effects differently than you could if they were all just plugged into (instantiated) the audio track.

Below is that video I keep talking about. It uses Pro Tools, but the steps are the same in any digital audio workstation (DAW). However, things can get more flexible, and consequently more complex, in computer mixers like you have in DAWs. For example, in Reaper, tracks can also act as busses! That means tracks CAN accept multiple sends from other tracks. So you can set up a track as an effects bus, putting the effects on that track and sort of combining the aux and bus into one. So you wouldn't have to route the send from and audio track first to a bus, and then to the aux track. Yeah, I know. That's a bit confusing, even to me, to read it. I'll write an article just on sends busses and auxiliary tracks to help it make sense.

Anyway, here is the video. I promise this time:).