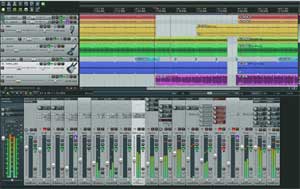 Reaper, the incredibly awesome recording software (DAW - digital audio workstation), just released a major update in version 4.5 yesterday, Sep 2nd. If you are not aware already, you don't pay for for this update if you already have Reaper. This is one of the unique and awesome features of Reaper ownership. By the way, I have no affiliation with Reaper other than how much I like it.

Despite the incredible features and community of Reaper - totally unique honor-based pricing system, uncrippled 60-day trial that never actually stops working, lightweight code (and hence, download), same basic professional features you find on DAWs costing 3 times more, etc., etc., (read our post about Reaper for more detail here - Why Reaper Rocks as a DAW ), one common complaint has always been its weakness in MIDI features and capability. This update has changed that!

Make no mistake, this update is huge across the board. But the MIDI changes are the coolest. Here are just a few of the improvements:

One person in the Reaper forum said he used to dread getting up in the morning knowing he had to face the Reaper MIDI Editor, and now he looks forward to it. Of course, it's only been 2 days;).

But that brings up another point. Reaper has ALREADY pushed an update to 4.5 (4.51) with even more improvements! That's 24 hours between updates. Short of some iOS apps, can you think of any other software companies that do this?

To see the complete list of the new stuff in the new version of Reaper, see it here - http://forum.cockos.com/showthread.php?t=127648 . Be sure to read through the entire thread for some explanations and pics of some of these updates.

To download Reaper, and/or find out everything about it, go here: http://www.cockos.com/reaper/