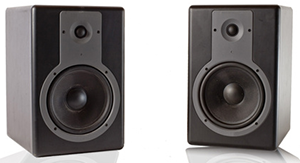 I am currently mixing my new album - Outlaws and Bystanders - and noticed that the lead vocal seemed to be coming more from the left side than the center (which is usually where the lead vocal is panned). At first, I just turned up the right monitor speaker, which - due to magic (or psycho-acoustics, whichever makes more sense to you:)) will move the perceived location of the lead vocal back toward the right and into the center. But I knew this was not a "fix." If I were to produce/mix-down the song this way, the lead vocal would still sound more to the left whenever anyone listened to it on any other system.

I HAD to find out what was going on with the right speaker, and soon. But I was in the middle of editing some strings and drums on the song, The Dogs of War*. So I put "fixing the monitor speaker" into the "I'll-do-that-right-after-I-finish-this" category. Unfortunately, I suffer from a condition that has plagued me all my life called "can't remember stuff (CRS for short)." So when I came back the next day to finish mixing the song, I noticed yet another thing wrong with the right monitor speaker. It would produce a winding sound every time I used the scroll-wheel on my mouse. THAT is not good. But it reminded me about the off-center vocal track. So I immediately stopped to fix the speaker problem if I could.

I am no electrician, but I know a "broke wire" when I hear one. It is often wise to use balanced cables when connecting monitor speakers, because they reject noisy caca (technical term)  produced by electric fields. I had XLR cables connecting my monitors to my monitoring mixer (note: I use an analog Mackie 1202 mixer in my home studio only for listening, NOT recording. See my post: Why You Should Not Use A Mixer In Your Home Recording Studio for why) because they are balanced. So when I heard this electric noise, which included not only the mouse noise, but the computer hum and buzzing as well, I figured the cable to the right monitor was no longer balanced. If one of the twisted pair of wires breaks, that will happen. Hint: If you ever hear the radio coming over your monitors, that is a problem (unless, of course, you are playing the radio through your monitors on purpose).

First, though, I did basic trouble-shooting by swapping the cables to the monitors to make sure it wasn't the speaker causing the issue. Sure enough, the problem moved to the left speaker. OF course this still could mean the mixer output was the culprit, so I swapped the cables coming from there to make sure. It was the cable.

So I went to my local music store and bought another XLR cable. Once I plugged that one in, all problems were solved with my mixing and monitors.

I recently read a good article on preparing for mixing by checking your monitoring set-up, which has some excellent tips on avoiding and/or fixing a problem like the one I just mentioned. That article is here: http://audioundone.com/prepping-for-your-mixing-session-checking-your-monitoring

*Dogs of War" is such an awesome song. And though I AM biased a little, it is objectively true! The lyrics AND music were written by Lisa Theriot for this one. Most of our songs have her writing the words and me writing the music. But this was one of those magic moments for Lisa where the song came fully-formed, which song-writers will tell you is like magic.