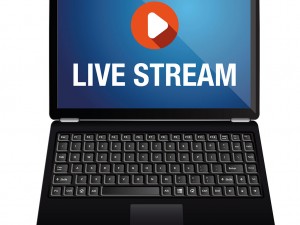 Somebody asked a question in a forum about how to do live streaming of an event. She'd never done this before. Somebody jumped and gave her advice about the video part of the equation, but said "Ken probably has a better idea about the audio." Thanks Phil:). The truth is that the same tips I give about getting good audio for any kind of video will also apply to a live streaming event. There are just a few additional potential situations that you may have to deal with, like if there is already a PA/sound system there to amplify the presenter.

Anyway, after I posted a rather lengthy reply, I thought it would be helpful to any of our readers who may want to live stream an event and has not done it before. So below is the advice I gave:

There are a lot of variables at play here (the person who asked the question didn't give many specifics about the event she wanted to stream). Things depend on how the event is being presented. For example, a simple person-sitting-in-front-of-a-computer can be done using a webcam as Phil (the first person in our group to give her streaming advice) said. The webcam's software can use whatever audio device you have connected. I recommend at least a large USB mic (not the headset kind) - something like a Samson Q2U ($38) on the lowest cost end, but preferably something more like a Samson C01U ($80) or the new Rode NT-USB ($169) (there are lots of choices these days). That's the simplest set up.

On the other end of the spectrum is capturing a presenter who is already being mic'd through a PA and speaking in front of an audience. For that, the webcam may be insufficient and you may need a video camera/camcorder. For that scenario you have a number of options. If the camcorder has a mic input jack (many don't!), you can put 2 mics in front of the presenter, one for the PA and one for the camera. That's the easiest. If your video camera does NOT have a mic input, you have to capture the audio to the computer via a USB-connected (easiest and cheapest) audio interface - something like a Focusrite Scarlett Solo ($99.99), or Alesis MultiMix 4 ($79). Again, if the event is already being amplified by a PA, you could run a separate mic just for the streaming and set that up next to the PA mic. If the presenter is wearing a lapel mic and walking around a lot, you could either ask the event sound guy for a split output from his mixing board and run that cable to your audio interface. Or even simpler, just set your mic in front of the PA speaker.

But I'll give you my two cents on getting the view into the computer or live streaming.  I was stuck in the paradigm of a "webcam" being a little thing that clips to your monitor. But there are webcams now that are tripod mountable and pretty much designed to do what you're doing. If you're using a laptop and can get close enough to your subject with it, a simple USB webcam is a good affordable solution. But there are also WiFi webcams that would allow you to "untether" from the computer. Of course that's more expensive (Logitech Broadcaster Wi-Fi Webcam - about $200 ).

And if you already have a standard camcorder, it might support USB live streaming if it has a USB output (might depend on the service you're using to stream as well). Or it may have an HDMI output. You could get/add an HDMI input for the computer if it doesn't already have one. Hopefully you'll be able to do what you need with all those options. Or maybe somebody who has done more live streaming of events can chime in.

One last important point about live streaming. Doing it on your personal internet connection might result in choking of your signal if more than 100 people want to watch. So you should look into a streaming service such as Ustream or Wirecast. They can take the signal onto a cloud or content delivery network that can flex with traffic and still provide a good non-stuttering signal to the end user.

Good audio is the ingredient usually missing from most internet video, including live streams. I leave you with a great quote tI found on a live streaming tutorial at Tuts+: "A high-quality audio stream can make jerky video more bearable, but terrible or distant-sounding audio can’t make up for great video quality. If at all possible, use a lapel or headset microphone for a moving source or a good quality mic close to a stationary source.” Yes!

One comment on “Getting Good Audio For Your Live Streaming Event”