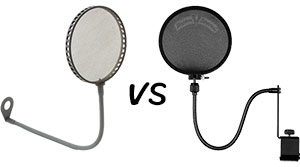 Recently I heard about a pop filter - that thing (usually round) that you see placed in front of microphones to helps prevent certain mouth sounds, mostly p-pops, from causing unpleasant sounds in a vocal recording - that actually DOES prevent p-pops. So I was eager to test it out for myself.

In my experience, if you are using a large diaphragm condenser (LDC) microphone, which is extremely sensitive, a pop-filter is a must. But though they usually help, they never completely prevent those explosive p-pops from finding their way into the recording. If we want pop-free recordings, we are forced to edit them out (see our article - How to Fix a “P-Pop” in Your Audio With Sound Editing Software) after the fact, which takes quite a long time.

Some folks (me included) try lining up 2 or even 3 pop-filters in a series in front of a mic in a desperate attempt to prevent p-pops altogether. These folks are usually disappointed.

But when I read about the Pauly Ton Superscreen Pop Filter, I was willing to pay the rather astoundingly high price (compared to the typical $20-$70) for one of my own if it actually did prevent p-pops at least 90 percent of the time. I would make up the extra cost in time savings after just a couple of voice-over jobs. So I ordered one and tested it. The results of my test are below, along with audio samples from recordings I made with both the Pauly Ton and a $33 Shure "Popper Stopper."

First though, what did I like about the Paluy Ton? I have to say that I've never seen a sturdier or more "industrial" looking filter than this. It looks like it seriously means business - battleship gray and hefty. They say it's built to last a lifetime and I believe that. Heck, it looks and feels like it would survive the apocalypse! The gooseneck is also amazing. It's totally silent and moves so smoothly and effortlessly that it's very clear you're dealing with a well-designed and well-built piece of gear. It's sturdy and pliable at the same time, which is no mean feat. The fabric is also different from most pop filters, soft and delicate, yet guaranteed to last, again, "for a lifetime." It was designed to simultaneously prevent the bad sounds (p-pops caused by plosives) from the mouth, while leaving the quality of the rest of the audio untouched. Folks say that some pop filters remove some of the "airiness" or other desirable vocal qualities along with the p-pops, which is not a good thing. People pay good money for their microphones and recording rooms. So to reduce or prevent plosives at the expense of recording quality seems a bad trade-off.

The Not So Good

The price. This thing costs $300! Now if you think long-term, and realize that you'll never have to buy another pop-filter again, it starts to make a bit more sense. And if it actually DOES stop p-pops dead, like advertised, then it would be worth it for sure. Like I said earlier, it would pay for itself in just 2 or 3 months in time-savings alone if it could prevent MY plosives from having to be edited out in post-production.

Now let me state right up front that everyone is different, which means that the severity/strength of a plosive will vary greatly from person to person. There are some folks who say they never need a pop filter AT ALL (!). In my world, that's crazy talk. I can't even imagine that world, because my plosive-foo is strong (and not in a good way). Also, there are those who say that the Pauly Ton has stopped all p-pops for them when no other pop filter would. That might be true for them. So I encourage you to try one out, in case you are one of those people. As you will shortly hear, I am most decidedly NOT one of those folks.

As you will hear below, the Pauly Ton Superscreen did not do much better than the Shure Popper Stopper at knocking down the p-pops for me.

I recorded three separate tracks of myself reciting the nursery rhyme, "Peter Piper," which is full of plosives. That is probably no text in the universe that has so many "P" sounds so concentrated in just a few lines - perfect for a test like this.

The first recording was me reciting directly into my Rode NT2-A microphone (through a Focusrite Scarlett 2i2 interface), in cardioid mode, with no pop filter at all. Then I recorded the same thing, only with the Pauly Ton filter between my mouth and the mic. Finally, with everything else the same, I recorded myself with a different pop filter - a "Popper Stopper" - in the same position as the Pauly Ton had occupied.

Both pop filters reduced the p-pops by quite a lot. But neither one performed noticeably better than the other in this regard. The Pauly Ton is also supposed to result in better quality audio AFTER it reduces p-pops, as it supposedly allows the rest of the voice recording to come through, when cheaper filters do not. I gotta say, I didn't hear any difference in audio quality either.

But that wouldn't be a scientifically valid test, since I knew which was which. You need at least a "blind" test in order for it to mean anything. So I had the lovely Lisa Theriot (my wife and fellow voice-over actor and singer) come to the studio and put on the headphones (Audio-Technica ATH M50s). I played both samples for her several times, in pairs, asking if she could detect any difference in plosive reduction. She couldn't. Then I asked if she could detect any difference in overall audio quality and tone. She couldn't.

We repeated the test with her voice and came up with the same results.

So, for us at least, the Pauly Ton was not the answer. That isn't to say it wouldn't be for you or for someone else. That's why I encourage you to test it for yourself. Everyone's voice (and lips and tongue, etc.) are different.

Here are the audio samples of my voice. The first is obviously the one with no filter at all. The two that follow are the with the two filters. I won't tell you which one before you hear them. You can find the answer in the text that follows these audio players. If you don't want the spoiler, don't scroll or read the answer before you listen. Use headphones if you can.

Which Was Which (Spoiler)?

If you have not had a chance to listen and you don't want to know which filter was which, then don't read this yet. But if you want to know, then HERE IS THE SPOILER:

Pop Filter A was the Shure Popper Stopper ($33)

Pop Filter B was the Pauly Ton Superscreen ($300)

28 comments on “Review Of The Pauly Ton Superscreen Pop Filter”