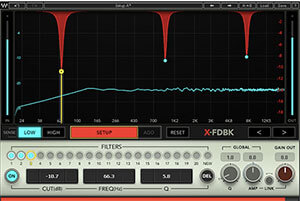 Every now and again we like to share stuff about live performance. this is mostly for musicians, but can also be useful for anyone using a PA for a live performance - magicians, actors, events with people speaking, etc.

When I play live music with a PA system (sometimes we play small gigs without a PA), feedback is ALWAYS an issue. And there isn't always a professional "sound guy/gal" in the back of the room that knows what to do about it, or has the gear to do it if they did. So what normally happens? The overall volume gets turned down and down until the feedback goes away. And this works, except for the fact that you might not be able to get your sound loud enough now.

Here is the basic problem. Sound is coming through the speakers and some of it comes back through the microphone to cause the problem. But it's not ALL the frequencies (see my article-with-video on EQ and frequencies to learn more about THAT - What is Equalization, Usually Called EQ?) It's usually only 1 or a couple of VERY narrow frequencies that are sort of getting trapped in the system and amplified over and over again until they overload the system AT JUST that frequency.

If we could turn down JUST that very specific and narrow frequency at a the source - which starts with making sure the mic is not facing the speakers, but after that is at the mixing board - we could eliminate the feedback. The tool needed at a mixing board is an equalizer, or EQ for short. You let the feedback ring and try turning down all the frequency volumes until you find the one responsible.

The problem with the EQ approach is that most mixing boards don't have controls for enough frequencies! What do they usually have? You most often find 3 controls - one for bass frequencies, one for middle frequencies, and one for high frequencies. That is not enough precision. You really need at least like a 30-band graphic EQ that gives you controls at 31 different frequencies (actually frequency "bands") from low (bass) to high.

So what you're left with is the only option, which is to turn down ALL the frequencies (usually with the master volume knob/fader) until the feedback goes away. It seems a waste of available volume to tell all the frequencies to be quiet when only one or two of them are making trouble.

Even with the a 30-band EQ though, it can be difficult, not to mention loud for everyone in the room, to locate the correct frequency. And once you find the first one, there may be a second or third ready to cause more feedback. Wouldn't it be cool if you had something that could immediately detect what frequencies were feeding back, and then immediately reduce the volume of JUST those frequencies? The correct answer is yes:).

And guess what? There is a tool that can do that. You'd need to have a computer at the mixing station. Maybe you're using a computer to do all your mixing, which is possible now of course. But the Waves X-FDBK Feedback Eliminator is exactly the right tool for doing what I just described.

Below is a video showing how X-FDBK works:

You can find out more or buy the plugin from Waves Audio here.