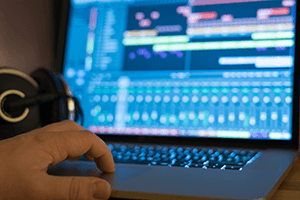 In case you didn't already know this - if we are recording audio into our computers, we're doing digital recording.  This is as opposed to analog audio recording, which is another way of saying the way we used to do it before computers (and I include a "digital recorder" as a form of a computer) came around. Before we had easy access to those things, we had to use tape to record audio. And before that, we had to record audio direct-to either wire, vinyl or wax.

I usually try to keep explanations of such things as digital recording as simple as possible, like recording into a microphone that is plugged into a computer.  I might offer metaphors like when the Master Control Program digitized Jeff Bridges in Tron, but I try not to wallow in the technical mire.

Here are a couple of my posts on the topic, which should help explain things in a more understandable way than usual (that's my goal anyway. Let me know in the comments if I succeed!):

16-Bit Audio Recording – What The Heck Does It Mean?

A Common Misconception About Bit Depth In Digital Audio

However, there are folks who really like to wallow in the technical mire. For them I offer this article, which digs into the science of digital recording.  It's actually an excerpt from the book “The Science Of Sound Recording” by Jay Kadis.

Check it out here: http://www.prosoundweb.com/article/the_science_of_sound_recording_part_1/