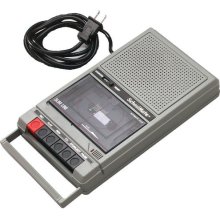 Over on the Home Recording Forum, someone started a post entitled:  All You Old Farts - Born Before 1967.  Now I don't know what the significance of 1967 is, but by that definition (born in 1964), I guess I'm an old fart (even though I LOOK fabulous...shyaa).  The idea was to get some idea what audio recording equipment we used way back when.

Anyway, the question was:

Come on tell us what gear were you weaned on?  Inspired by the "how do you know so much post"

Here is my answer, for whatever educational value it is worth:

Wow, I'm officially an old fart? Do I get a card or something?

I started out with an old cassette recorder similar to the Hamilton Electronics HA-802 Cassette Player and Recorder. I would play a guitar part and sing along (or play another guitar part along for those cool Jim Croce songs) while recording into my brother's boom box. I used the little built-in condenser mic for both. Then I would play those 2 parts back from the boom box onto my cassette recorder as many times as I needed instruments and harmonies. This hiss was incredible.

Eventually I graduated to doing the same thing but with better machines, like the ones in entertainment centers, and used a PA mixer in there somewhere. Finally, in 1988, I bought a Tascam Porta 5 4-track cassette recorder. That was a life-changer. One more 4-track cassette machine and a Sony DAT machine later, I got my first digital machine, the Roland VS-840. The next year I bought the VS-880 off e-bay for the amazing deal of $1200. That was my primary throughout the early 2000s, when I added outboard gear, monitor speakers (starting with Alesis Monitor Ones...now using the Event TR-8s), separate mic preamp (the Peavy VMP 2 Tube mic preamp, which I still use), compressor, EQ, etc. Then I made the jump to doing everything in the computer right around 2003, using Adobe Audition. Eventually I added Reaper as my DAW and continue to use AA as my editor.

That's about it in a nutshell from this old fart.