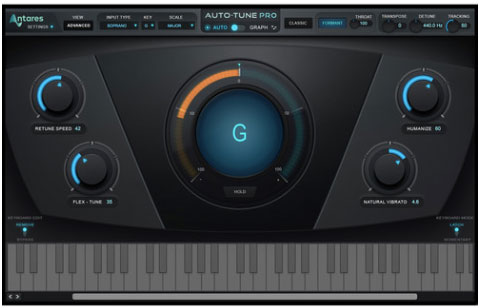 Has anyone else gotten a little tired of singers on the radio sounding so pitch-perfect that it sounds more like a machine than a human?  Me too.  It has to do with the over-use and abuse (in my mind) of pith corrections tools, such as Melodyne and Auto-Tune.

Now let me go on record right now as a fan of Auto-Tune.  It's a tool.  When a singer puts out a recording, I believe they have a responsibility to ensure the performance is good.

For a singer, that means in tune, on-key, on pitch, however you want to describe it.  When you sing live, if you're good enough to be a pro, you should be good, yes.  But humans will inevitably be imperfect and may even hit one or two downright off-key notes here and there.  But when it's live, it's fleeting.

As an audience member you may or may not even notice.  If you do, you'll probably forget it 5 seconds later.  Not true for recordings!  When fans are listening to the same performance over and over again, those one or two wonky notes will grate on them.

Before there was Auto-Tune, it was common practice to have a singer sing a track 3 or more times so the engineer could "comp" (short for composite) one vocal track made up of the best pieces from all three tracks.  Is this any more genuine than fixing it after the fact with tuning software?  My answer is that if the singer can bring it live, then no, it is no more genuine to use Auto-Tune than it is to comp a track.

In fact, I have found that if a singer knows things can be tightened up after the fact, they are more likely to sing without worry or stress.  Studio singing often makes singers too careful and they don't give their best performance.  So the very idea of Auto-Tune can actually help the singer sing better before a single note has been "fixed!"

However, what seems to be happening is that engineers and producers are over-doing the Auto-Tune thing.  They wash every note through a program that snaps all the notes to a pitch grid.  It results in an unnatural sounding vocal.  I think that is wrong.  It may take longer, but I firmly believe that tuning should only be applied to specific (and infrequent if the singer is decent) notes that missed the mark.  That way it sounds like an actual human sang the note, not a machine.

It may take longer, but I firmly believe that tuning should only be applied to specific (and infrequent if the singer is decent) notes that missed the mark.  That way it sounds like an actual human sang the note, not a machine.

The other use of Auto-Tune lately is as an effect, a la T-Pain or the Songify-type applications made popular by things like Auto-Tune The News. This is a totally different thing.  It isn't trying to make you think someone can sing better than they can.  It's just trying to create a funky sound to add creativity or something different, although as common as it has become, I don't think "different" is the right word.  I say go for it when it comes to that.  It allows people to get funky and be creative.

So there you have it.  Auto-Tune is a tool like any other.  I love what it can do for singers.  But as with any other tool, in the wrong hands it can be ugly.