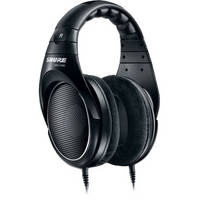 Shure, the company known primarily for their excellent microphones, made a pretty big splash in 2010 when they released some studio headphones (the SRH440 and SRH840). But these were closed-back headphones, which are a type needed by folks when recording in the studio, mainly so that the sound coming into their headphones doesn't get picked up by the mics, as happens with open-back cans. The closed-back kind can also help isolate the listener from outside noise. But the open-back design has a big advantage in that it allows sound to move around in the air and allows the driver to move with less restriction, creating a better and usually more accurate playback.

The new Shure SRH 1440 is the open-back kind.  They are also "circumaural," which means that they go on over and around your ears as opposed to the kind that sort of smash your ears into the side of your head.  This makes them much more comfortable.  Anyone who has spent a few hours with the other kind on their noggins can attest to how sore your ears can get.  And pain is just not conducive to long hours in the studio.  Bottom line - these things are really comfy.

So what makes these so special?

They are deadly accurate, which means you can hear everything, even if it isn't something that should be heard.  This is a good thing for headphones in the studio.  You don't want to be lulled into a false sense of security by headphones that make audio sound better than it really is because the first time you hear your mixes somewhere else, like in the car, or on a CD player, it might sound really awful.  What you need is the truth.  And accurate headphones like the SRH1440 can give you that.

The reason this is such a big deal, especially now, is that so many of us record and mix in less-than-ideal rooms, usually spare bedrooms.  We do the best we can to mix our audio accurately but poor listening rooms will always impart something to the sound that makes us react by cutting or boosting the wrong frequencies, or panning incorrectly.  It might then sound good in that room, but as soon as that room is no longer imparting it's two cents to the sound, like when we play it on a friend's stereo, we usually find the mix doesn't sound good anymore.  The mix is not "portable."

Then there is the age-old advice that we should never mix exclusively with headphones because they lie to us, or they lie MORE than the monitor speakers in our bad rooms.  The logic behind that is that it is more natural to hear audio through the air.

So if we take it as given that we don't have ideal spaces to listen critically, and loudspeakers, even though they play through the air, will still be too affected by room dynamics, we are really only left with headphones as the next best choice.  And because the SRH1440 headphones are so accurate and allow the sound to move in the air due to their open-back design, we can go a long way toward overcoming bad rooms and maybe bad speakers to create great mixes by using headphones like these.

The SRH1440s cost $399, which may sound like a lot, but consider this.  A decent pair of monitor speakers will start out at about $400 or $500 per speaker.  And then you still probably have a bad listening room to put them in.  So compared to $800-$1,000 to get better mixes, the cost of these headphones is an excellent investment in your audio.